There’s a long-term benefit of working in standing desks according to the latest health advice from the Public Health England and Active Working CIC. No one has taken this advice seriously — well until now. New studies have shown that this gave rise to health problems like Diabetes, cancer, metabolic imbalances and obesity later in life.

Health advice from an International panel of experts says start work towards a light activity or standing for at least two hours a day. Studies has revealed that too much sitting has been linked to several health problems for the past few years.

Currently there are no specific recommendation as to how many hours people should stand to gain good health benefits. But as a starting point, two to four hours should make a good baseline.

Experts from British Journal of Sport Medicine wrote that around 75 percent of the office worker in UK spend most of their time sitting. The said panel advocated health advice against long duration of sitting. This study is also backed by various universities and research institutions in Australia, UK and U.S.

According to Dr. Sebastien Chastin from Glasgow Caledonian University from U.K, relative evidence has shown that too much sitting is associated with health concerns such as cardiovascular disease, certain cancers, diabetes and bone conditions.

In the workplace, adapting this kind of change may require changing the activities that goes within the break and when these breaks happen. Adopting a certain desk design or technology that allows individuals to work while standing up should help with this.

‘Sitting is the New smoking’

Despite public health advice in promoting exercises regularly and eating right, people are still not doing purposeful exercise, thus still sitting more to get things done. Research prompted that for those who are not gaining the full benefits of a physically active lifestyle can at least mitigate this through standing.

Since concrete results won’t come until next 20 years, starting with a two to four hour standing period should be a reasonable period to minimize associated health issues.

There are companies that have already started the movement while others have still to begin. However, the receptivity of the idea may vary country to country. 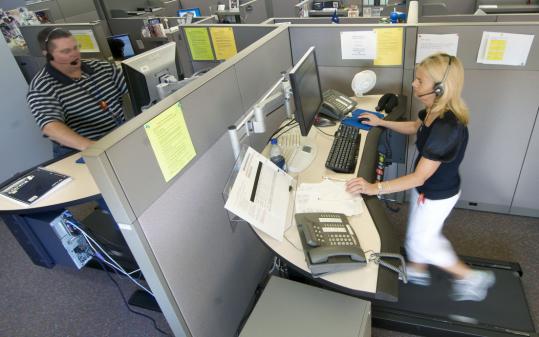 Mutual of Omaha has installed treadmill desks to get employees to walk while they work. (source: boston.com)

Provided that everything digital travels faster, there’s a strong need to promote this health advice. Adjusting to this shift through little activities like accepting a stand phone call, walking during a meeting and going to a co-workers table instead of Skyping them may help in promoting better health in the workplace.

Here’s another insight from Nilofer Merchant from TedTalks.